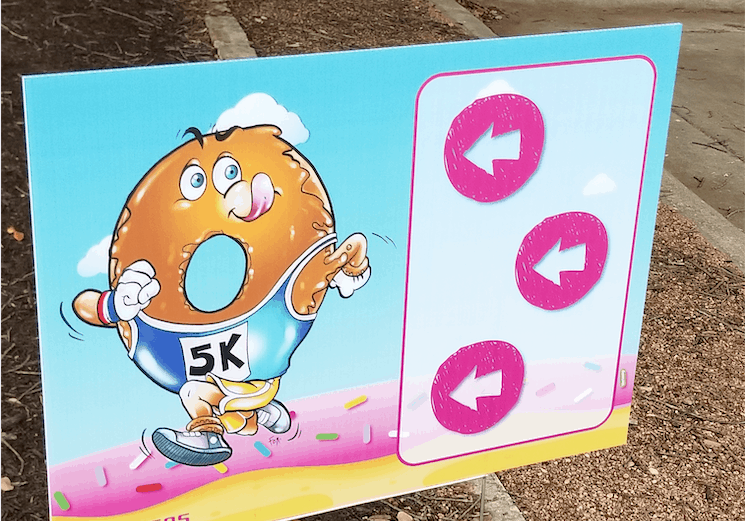 All work and no play make for a hungry team according to Actian employees, or at least that’s what we found out during a local community event.

With our new location nestled in the quiet little city of Round Rock, it was time to venture out and find new ways to embrace the new surrounds. We caught wind of a new tradition that was going to take place and it involved donuts soooo… what were we waiting for?

A small group of us decided to sign up for the 1st Annual Round Rock Donut Dash 5K. If you’ve never heard of Round Rock Donuts, where have you been? This famous establishment has been in business since 1926 and has been featured on national platforms such as USA Today, The Food Network, and The Jimmy Kimmel Show just to name a few.

So, what made this 5K different than all the rest? The competitor category challenged runners to run the first half of the race to a pitstop where 12 Round Rock donuts would be waiting to be demolished before being able to complete the second half of the race, all in under an hour. It seemed like a small feat at first, but little did our team know just how difficult this challenge would be. With all of that being said, Daniel, Tony and I were not daunted by the task at hand. We went, we ate, we conquered.

We are happy to report that no Actian employees were harmed during their attempt at this event and all participants that entered the challenger category successfully completed the challenge.

Ada is a HR professional with over 10 years’ experience working in a diverse portfolio of industries. She holds an MBA and is certified as a Senior Professional in Human Resources (SHRM-SCP). As the HR Business Partner at Actian she performs as a consultant to senior level leaders and strategically aligns people management to business objectives. She believes in developing strong partnerships both professionally and personally.